Skip to content
I usually recommend Signal as a simple-to-use and secure form of communication. Signal is primarily known for its mobile app, but there is also a desktop application based on Electron. The desktop app has a very annoying, long-standing issue which has already been reported on GitHub in 2018: whenever a new application update is available, the app shows a message box prompting the user to restart Signal. Unfortunately - at least on macOS - Electron message boxes un-minimize the whole application window and show the message box on-top of the application.
Read more
This week, I changed my server OS from Debian to CentOS 7. Since I don’t appreciate having all those Ruby dependencies on my clients, I changed my static site generator to Hugo. I intend to bring back most of my old posts in the next few days.
TL’DR: I tried to attach three monitors to Lenovo’s Ultra Dock. At least at the moment, that only works if one of the monitors is attached to the analog VGA port because the Intel Graphics Driver does not support nested MST. For the better half of a decade, my primary laptop has been a Thinkpad Edge 11. The dedicated ATI graphics unit was a major pain: using the open source drivers, the GPU idled around 60°-70° C (even using DPM) and constantly caused the fan to go bananas.
Read more 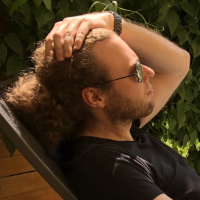